Sericea Lespedeza, Lespedeza cuneata (Dumont) G. Don, is a very aggressive, drought-hardy perennial. It was introduced as a forage crop in the Southeastern United States. As early as the 1930s, Sericea was also used for erosion control and wildlife habitats in Kansas. It is now found primarily in native rangeland, CRP, and roadsides in the eastern 1/3 of Kansas. Plants have a dark green foliage that contrasts the native grass color in the early fall. Lespedeza has small, white, purple tinged flowers that bloom in late summer and produce large amounts of seed. It also has a semi-woody stem and can reach five feet in height. 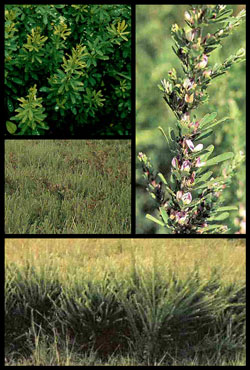 Sericea is a problem because of its ability to compete with native bunch type grasses. It's aggressive behavior allows it to choke out existing vegetation. Sericea also contains a tannin that makes it unpalatable to livestock for most of the grazing season. It can also tolerate and survive most common weed control practices used by farmers and ranchers.

During the 1998 Kansas Legislative session, lawmakers amended the Kansas Noxious Weed Law to include Sericea Lespedeza as a noxious weed. The statute was written to allow time for further research and sericea did not officially become a "noxious weed" until July 1, 2000. Counties had the option to make it a noxious weed within their borders early, by resolution and publication. This allowed for enforcement and cost-share chemical availability, but did not address the movement of sericea seed in grass forage seed.

Sericea lespedeza is a perennial with erect stems up to 5 ft. tall and small hairs laying flat along the ridges on the stem. The leaves, with 3 leaflets, are less than 1 inch to 1 1/2 inches long and 1/4 to 1/2 inch wide with the larger leaflets on the lower portion of the stem. The leaves are flattened on the outer end with small flat hairs on the lower surface. Flowering occurs from mid or late July to October and may be tinged with purple but always dry to yellow. The tannin content of sericea lespedeza increases during the growing season, making it unpalatable to livestock during mid to late season grazing.

Sericea lespedeza can be treated with a variety of cultural, mechanical, and chemical means. Preventing seed production and its spread is of primary importance for control. The Jefferson County Weed Department is promoting a holistic farm management approach as the most effective control for sericea. This method involves using many different strategies to eradicate the problem. The Jefferson County Weed Department encourages farmers to develop a management plan to coordinate and facilitate these holistic practices. Examples would include the use of pasture burning, mowing, fertilization, selective grazing, and tillage in conjunction with approved herbicide use.

Inspect all pastures and rangeland in July, August and September. Early detection of the presence of Sericea Lespedeza is essential to economical control.

Do not move hay that may contain viable seed from infested areas. Feed noxious-weed-free hay and forage. Check the labels of grass seed and grass seed mixtures for the presence of Sericea Lespedeza prior to purchase. Do not move mature cattle in late summer through October from an infested pasture to a clean pasture.