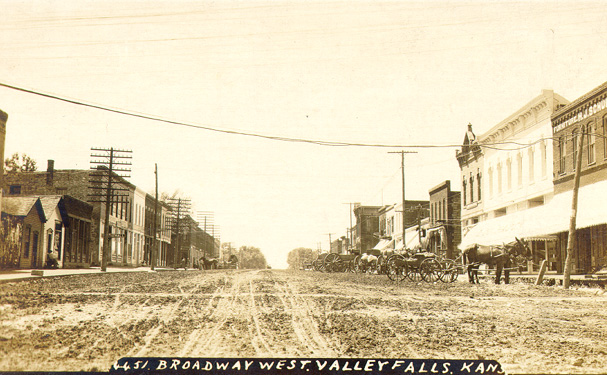 The Territorial Legislature met in July 1855 and formed the boundaries for Jefferson County, KS. Named for President Thomas Jefferson, the county is made up of eight towns: Oskaloosa, Valley Falls, Winchester, Nortonville, McLouth, Perry, Meriden, and Ozawkie, with small communities at Rock Creek, Grantville, and Williamstown. Although there are deposits of coal, oil, and gas, Jefferson County is chiefly agricultural - crops, cattle, and hogs.

Situated on the Old Military Road from Fort Leavenworth to Fort Riley, Ozawkie was designated as the first county seat in 1855. The county seat was then moved to Oskaloosa in 1858 with a majority reaffirming vote in 1864. The Jefferson County Courthouse, which was built in the center of the town square in 1867, was destroyed by a tornado in May 1960. At the time of its destruction, it was the oldest courthouse in the State of Kansas. In 1962, Jefferson County occupied a new courthouse built on the same location.

Jefferson County is rich in history and home to the famous artist John Steuart Curry (1897-1946), a native of Winchester. Curry is buried there in a local church cemetery. His murals decorate the State Capitol building in Topeka. His most renowned mural is titled "Tragic Prelude” and portrays John Brown during the “Bleeding Kansas” pre-Civil War era when abolitionist battles spotted northeast Kansas and western Missouri. In Jefferson County, the 1856 skirmish at Hickory Point marked a Free State victory.


Physical Features of the County Like Curry portrayed in his paintings, the Jefferson County terrain is rolling and hilly; a patchwork of woods and small streams. While “The Kaw” or Kansas River forms its southern boundary, the largest river in Jefferson County is the Delaware. The greater portion of the Delaware is now absorbed by Perry Lake with headwaters at Valley Falls.

The Perry Lake reservoir inundated the original town of Ozawkie. The town was then rebuilt on higher ground to the west of the original Delaware River. Perry Lake, dedicated in 1970, is the third largest lake in Kansas, covering 12,200 acres. The Corps of Engineers operates Perry Lake’s recreational areas and wildlife preservation.

The Jefferson County Historical Society was organized in January 1966. Its main project is the recreation of Old Jefferson Town. This pioneer village with authentic, relocated buildings is located on a six-acre tract along Highway 59 in Oskaloosa.
Facebook
Twitter
/QuickLinks.aspx
/QuickLinks.aspx
[]